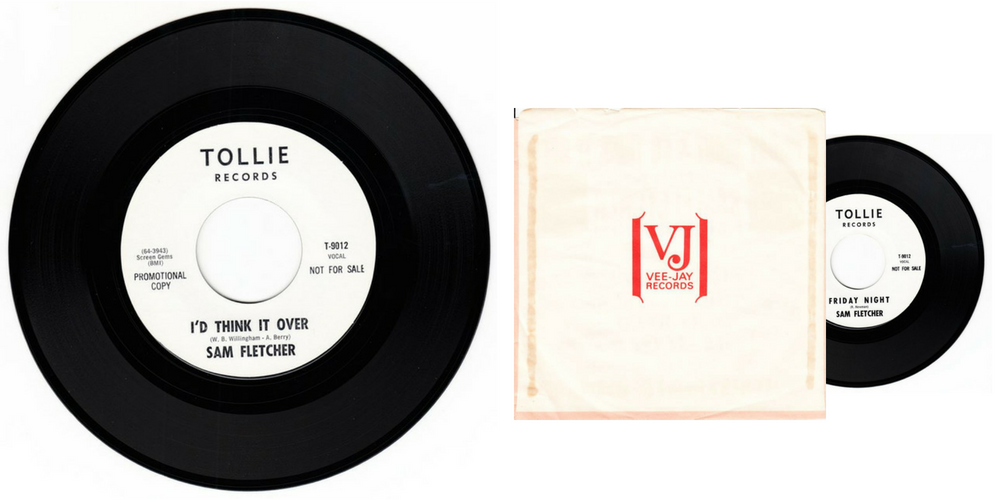 There are plenty of fantastic rare vinyl records out there that are much-loved by many vinyl collectors. However, a particular record – and artist – that has worked its way into John Manship’s favourites, is an excellent soul record by Sam Fletcher. This article will take you through Manship’s memory of the great Sam Fletcher record I’d Think It Over. 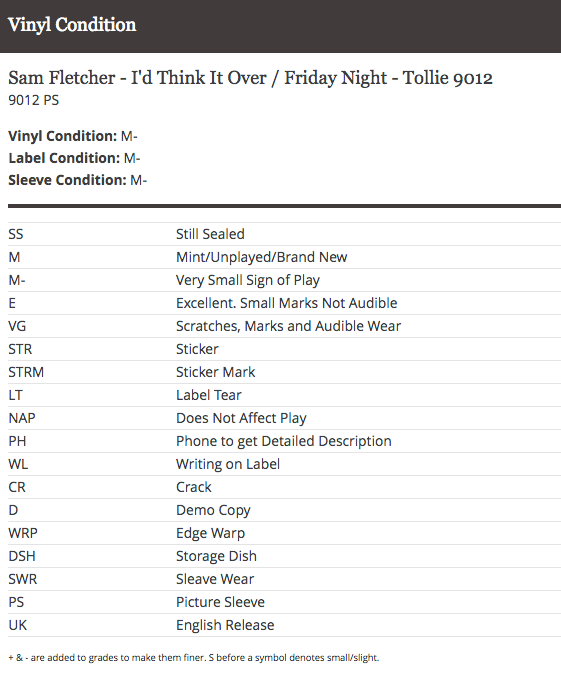 Manship’s Thoughts: “If Only I Knew Back Then”

In 1976 as a naive wannabe, I was combing the US trying to find Northern Soul to bring back to the UK. It was hard back then to make a trip profitable. If didn’t pay dividends I couldn’t see how I could afford a return trip. However, the records were there, my knowledge wasn’t.

I had made contact with a Beatles collector in Miami by the name of Rich Ulloa. He had just purchased a rare Beatles related 45 from me: Tip Of My Tongue by Tommy Quickly. It was a Lennon and McCartney composition from 1963 in UK press.

It was in a mint, unplayed condition so, obviously, he was a very happy Fab 4 boy. He said if I get to the States, I should drop by. He knew a few places I might be able to find some records from. Sadly, that was the biggest understatement of my life.

At The Record Store

When he took me to a store, there was a guy who had moved down from Chicago with 3 trucks loaded up. They contained Vee Jay 45’s and LP’s. The guy used to be a Vee Jay big shot, he thought he would retire in Miami and sell the records he had accumulated within the business.

It was a huge beachfront store full to the rafters with sealed albums: the 45’s were in the back. It was a labyrinth of rooms racked up with 45’s. Maybe 250,000 or more.

The problem was, that the owner was in the hospital having heart surgery but the lady manager liked my accent so encouraged me to go dig around before warning to be careful. “It’s a mess back there” – another understatement.

The owner had used the rooms as a clutter-tipping point. Bicycles, fridges, mops, buckets, bread bins, mixers, boxes of clothes, shoes, and every other defunct household item you care to mention. His lifetime of jumble and chaos blocked access to the first 8 shelves all three sides of all of the rooms. I had to climb over his detritus to start looking at the top 3 racks. I only had 3 days before I flew home…

What a dick-head! I should have emptied each room and thoroughly looked at every record. But I was young, excited and knew practically nothing about doing a serious job on such an overwhelming load. 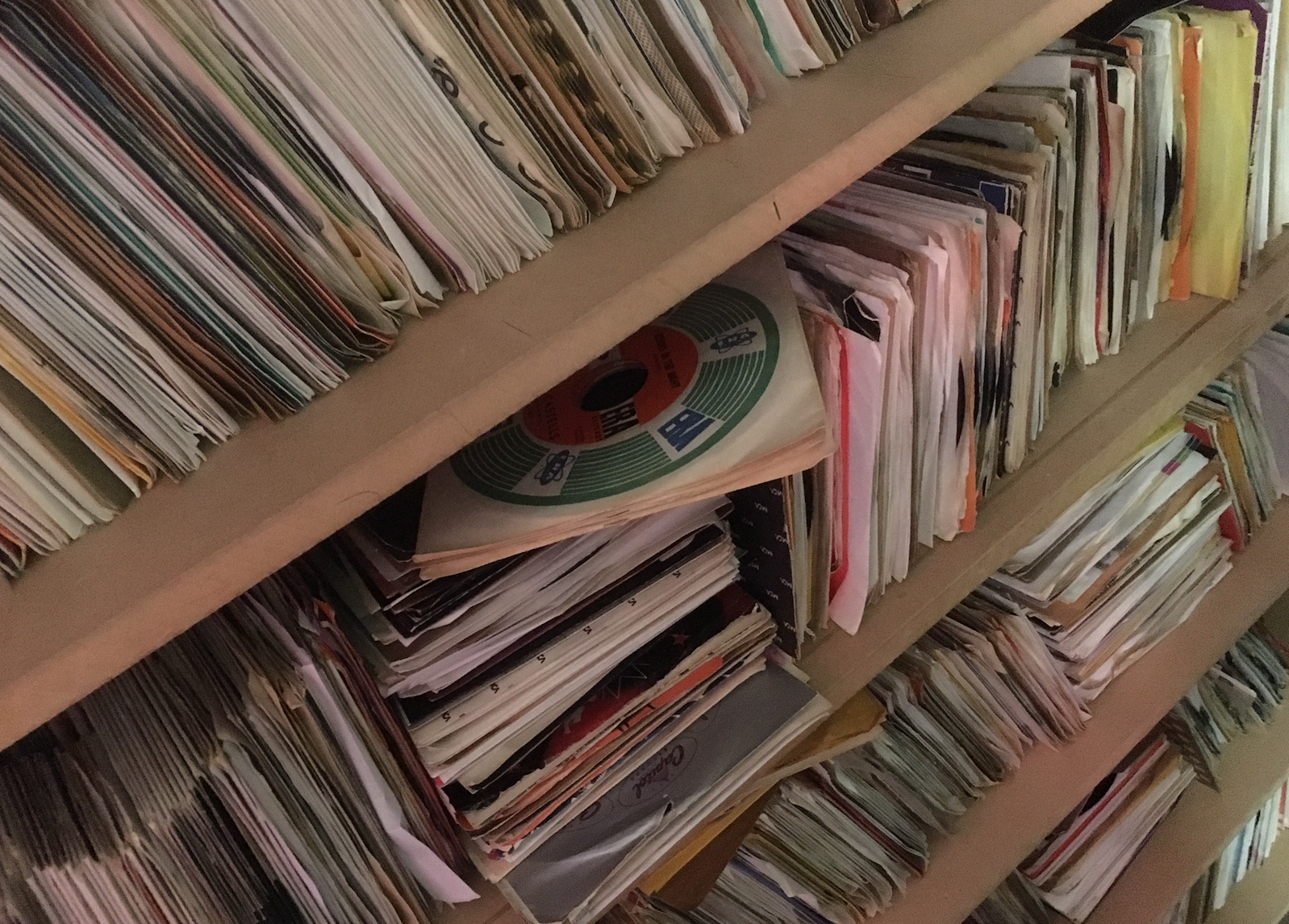 There was very little on Vee Jay 45’s, other than Fred Hughes and Betty Everett – that was a Northern Soul must-have 45, at the time. So, I concentrated on labels like St. Lawrence, Champion and Exodus. I scored like a pig. Tainted Love promos, Batman At The Go-Go promos just a ton of stuff. I was really pleased, all mint, all 50 cents each.

Richie was super pleased too. I found a handful of Beatles Vee Jay EP’s promos in picture covers. I let him have them – for goodness sake – as I had no interest or knowledge of other priceless records at the time. A moment that will stay with me forever.

Diving Deeper In the Store

At the very end of the building was a sidewall about 8 foot by 8 foot just full of one title on Tollie: Sam Fletcher. There were thousands and thousands of copies of yellow label Sam Fletchers. I didn’t know the title so I played it.

At first, I thought it was OK but far too slow for a Northern Soul tune. I ignored them and went back to clambering around on the junk, randomly pulling out handfuls of accessible 45’s and finding a few I wanted, every so often.

I went to Miami Airport chuffed as hell with my finds. Amazingly, my local competitor Rob Lythall of Leicester was in the same airport lounge after a holiday. I couldn’t wait to waft a few St. Lawrence promos under his nose. It was totally cruel but gave me a strange warming feeling inside.

Then when I got home, I reflected on what a crap job I did sifting through, this once-in-a-lifetime vinyl hoard. I couldn’t help myself. I rang Richie and said I’d like to come back and do the job properly, clean each room out of junk and see the 80% I couldn’t get at.

Then the bombshell was dropped. The Vee Jay man never recovered from heart surgery, the shop closed and nobody knows where the records went to.

But I can tell you, those 3 days still haunt me today. That indelible shining vision of wall to wall of Sam Fletcher records. We all know of that record-dealer hurt, that strikes all too often when you reflect back upon your mistakes due to inexperience and haste. A lesson was learnt.

Help: If anyone knows which “dump” those records went to, myself and Richie would love to know. Apparently, none of those records ever turned up again…

Want to bid on this record? 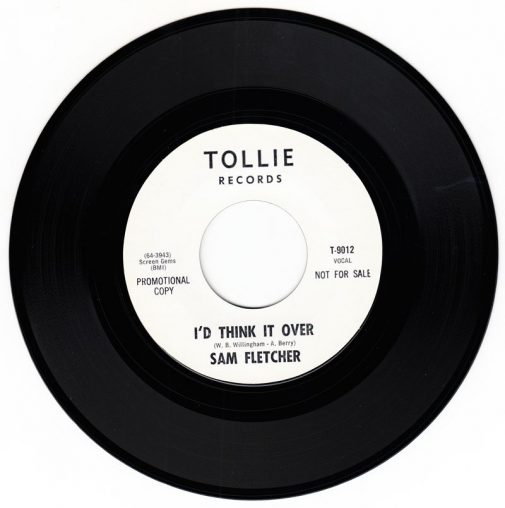