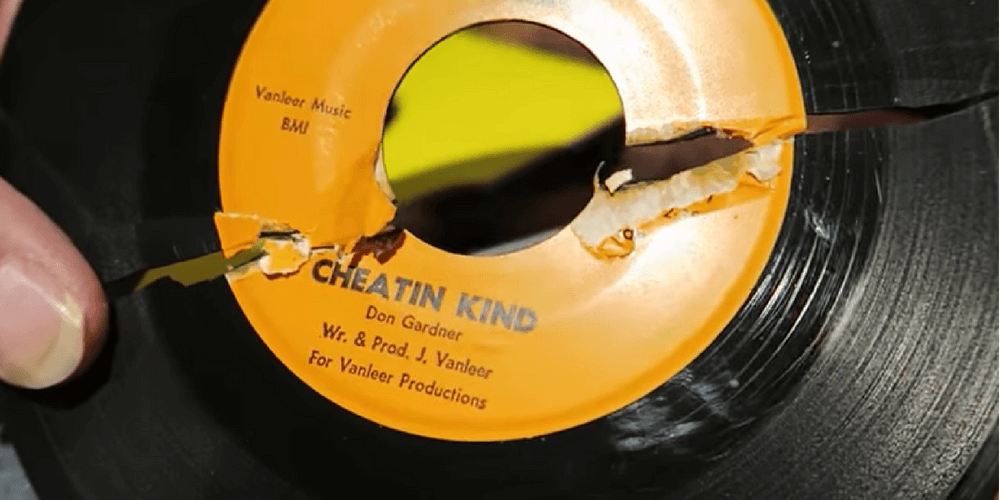 No matter how much you can care and protect your vinyl records, sometimes breaking a rare vinyl record is inevitable. With them being so fragile and sometimes misused in their early lives, they can become prone to snap when being handled and transported from places in the home, during DJ sets and from owner to owner. This post will take a look at a broken vinyl record Cheatin Kind by Don Gardner, worth £9,000 and John Manship’s thoughts on the topic.

In August 2016 John Manship auctioned one of the world’s rarest records which was eventually won by one of Australia’s biggest vinyl collectors. This was mailed off and sent via FedEx, which is usually deemed to be an extremely safe and reliable courier.

However, sadly, as you’ll see, this wasn’t the case in this instance. Unfortunately, this record was run over resulting in the rare vinyl record being left in two pieces. A true collector’s nightmare!

The Australian collector who sadly had the hard job of unboxing this rare record was of course, in absolute shock. Like any passionate collector, he ended up suffering extreme heart palpitations, though I’m happy to state he was and is okay.

Please Note: The collector was refunded and this issue was all resolved swiftly by the Rare Soul team.

This confirmed to me just how important it was, and still is, as a collector to do your absolute best to care for and clean your vinyl records to keep them in the best of condition to avoid the major disappointment of them being destroyed.

A month later, once this devastating event had some time to pass, I received a message from the collector via Facebook. The message stated that the auction winner was brushing his dog and funnily enough found pieces of the record stuck within the animal’s fur. There are still pieces missing from the vinyl record, today. 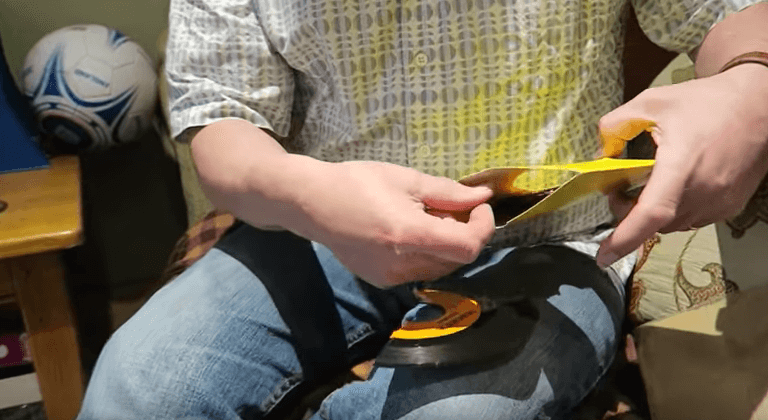 This record will now be framed and placed on the wall in the Rare Soulman office going down in Manship’s memories as one of the worst things to happen during his time record collecting.

John first bought the Cheatin Kind vinyl record from John Anderson, who at his time, was one of the most prolific soul dealers in the world. He has retired now but back in the day he had more great soul vinyl records than anyone else. John bought a counterfeit copy of this record for £3.00.

I would play this record at Cleethorpes Pier and get zero reaction at the time. One day, I went to play at the Ritz. The following big records formerly played here will give you an idea of the way that music was going. Artists like The Miracles, with their The City of Angels LP and Love Machine, which was huge. Others like The Varies’ It Only Takes A Minute and Heaven Must Be Missing An Angel.

In contrast, I was trying to play tracks like Bernie Williams’ Ever Again, as well as Cheatin Kind, No One Else Can Take Your Place by Inspirations. All of these bombed. On that day, I got quite disillusioned.

Collin Courteous then asked if I would consider selling Ever Again by Bernie Williams. He suggested swamping it for Andre Gagnon’s’ Wow, which was a French disco record. It was dreadful back then and it’s still dreadful now but it was just the thing that people had started listening to.

I then decided to go ahead with the swap thinking “yes, I’ve got something to play that people will want to dance to.” However, Wow is now worth probably £1.00. Sadly, this record never really took off. Hence, this is one of the worst deals I’ve ever done in my entire DJ-ing life.

I then left the decks and went for a walk to the bar. Evia Lavigne said to me “you’ve just sold that Bernie Williams record to Collin, I wanted that record!”. I showed him my collection and the other similar records I had with me. He then asked “how much for Inspirations’ No One Else Can Take Your Place” though I didn’t want to sell that. “Well, how much for your Cheatin Kind” to which I replied, “give me £3.00.”

He continued to go on. “Well, how much for the Utopias” to which I replied, “well, that’s pretty rare so give me £15.00.” Though these records weren’t enough for him. He went on again. “Go on, how much for that Inspirations record?” and I replied, “I ain’t selling it for less than £20.00.”

Want to enter a Rare Soulman Auction? Here you can find great rare vinyl records for an excellent price whilst enjoying bidding with other vinyl collectors.

Looking for a particular record? You can search through our various vinyl record categories including some of our most popular sections: